In Flooded McDonald's, a convincing life-size replica of a McDonald's fast-food restaurant is gradually flooded. Furniture is lifted by the water, trays of food and drinks float around, electronics short circuit and eventually the space is completely submerged. Blurring the lines between documentary and art film, Flooded McDonald’s uses Hollywood techniques to playfully and irreverently confront the apocalyptic themes that came to the forefront of cultural consciousness after the 2008 financial crisis and amidst climate disasters.

The the filmwork documents the submersion of McDonald’s globally famous symbols. As they bob and sink in the water, the inanimate objects become characters in an unconventional post-apocalyptic film. Flooded McDonald's hints at the role of large multinational companies in the escalation of climate change, and asks with whom responsibility lies.

Flooded McDonald's was first exhibited at South London Gallery in 2009. The exhibition is supported by the Danish Arts Council's Committee for International Visual Art. 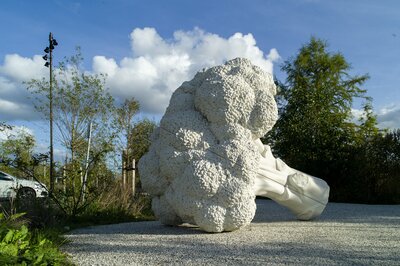